Have a belt for the road…

I wear seat belts when I drive. I’m sure you do, too. But did you know that 132 of the 238 Tennesseans who died in traffic accidents from January to April of this year were not wearing seat belts? 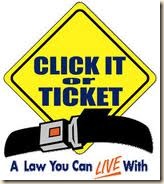 Here’s another shocker -- look at what Captain Jim Hutcherson, commander of the Tennessee Highway Patrol’s Nashville District (made up of 12 middle TN counties), did on April 6, 2012. As reported in The Tennessean newspaper, on that day he directed all THP troopers in the Nashville District to do nothing except look for drivers not wearing seatbelts. Troopers pulled over 1,101 people that day!
According to National Safety Council, 88% percent of Americans do indeed use seat belts, but there are a few groups that are less likely to wear belts: teens, commercial drivers, males in rural areas, pick-up drivers, people driving at night, and people who have been drinking.
In the end, we can’t save people from themselves, but we can at least try to pay a little more attention to friends and loved ones who drive and make sure they are buckled up.