On the road again -- Frisky deer make for risky driving…

Seen more deer out and about while you’re driving these days? There’s a good reason – we’re reaching the peak of the deer mating season here in Franklin TN, and all of Middle Tennessee. Which reminds us that we need to watch out for these beautiful creatures while driving.

November is traditionally has the highest number of deer-related auto crashes in Williamson and Davidson counties. It’s a year-round issue, really. In fact, last year, Williamson County TN was tied for second of all Tennessee counties for the number of deer-auto crashes. Montgomery County had the highest number. These numbers are holding so far, this year, according to the Tennessee Department of Safety and Homeland Security.

Stay safe with these tips:

-- Keep a sharp eye out for deer, especially during their busy mating season --  now.

-- When you see one deer crossing the road, there are likely more to follow soon, so go slow.

-- Dawn and dusk is prime time for deer to appear, coinciding with commuters’ drive times, so be especially aware at these hours.

-- Don’t swerve to avoid a deer; you could make it an even more serious accident.

It’s also a good idea not to stop in the middle of the road to take pictures of deer that you see as you drive, as I recently came upon someone doing exactly that, after I had come around a curve!

Following a long-standing tradition, the David Yates Insurance Agency passed out over 175 free Child I.D. fingerprint kits to parents last Saturday at the Williamson County Soccer Association Picture Day event in Franklin, TN. Held at the Williamson County indoor soccer arena on Downs Boulevard, thousands of soccer players and their parents were there to take team pictures, as well as to compete in soccer matches. 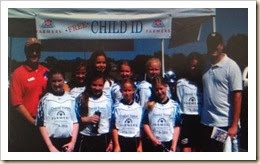 It was also a tremendous privilege to meet the David Yates Insurance soccer team,  a great group of young ladies who are, so far, undefeated on the field! My agency has sponsored many WCSA soccer teams for eight straight years now, ever since our inception.
If you’d like one or more free Child I.D. fingerprint kits, please call me at 615-778-1816, and I’ll be more than happy to provide them to you.