It's not your imagination -- there ARE more cars out there on the roads... 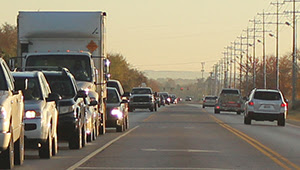 ﻿Have you noticed there seems to be so many more cars out there on the streets of Franklin TN, and the whole Nashville TN metro area, for that matter?  It's apparently a nationwide trend, too.  As reported in today's Wall Street Journal, the Federal Highway Administration reports that U.S. drivers have driven a record 1.54 trillion miles through the first half of 2015 (don't ask me how they calculate that!).


Experts tend to agree that lower gas prices and higher employment rates mean more people are out there driving, which likely leads to more wrecks.  In fact, the National Safety Council expects U.S. motor-vehicle deaths this year to top 40,000 for the first time since 2007.  The NSC also estimates one out of every four car accidents involves cell-phone usage -- a figure, I think, which is even higher, given how many "bowed heads" I see out there driving around.

So what's our take-away from all this?  Be careful out there.  As I tell my 16-year-old daughter, don't tailgate, and always give yourself an "out".

Finally, here's a motto that's been around forever, but has never been more appropriate than it is today:  Look out for the other guy!