Is there mystery behind your walls, or under your floors?

Got sucked into a mystery movie on TV last night. This teenager in a ritzy neighborhood lives next door to a middle-aged man, whom he suspects is a killer.  The climax of the movie, of course, is at the end, when the teenager sneaks into the man's house, and discovers a hidden room that leads to a basement, containing a huge, deep body of water, in which he discovers some bad things.
I won't get into anymore details about the movie, which, although it started out well, became more unbelievable as it went on.  When the teen went into the man's basement, my insurance-nerd mind started drifting to how poor an insurance risk that "nice" house was.  I started evaluating this home on its insurable merits. Water in the basement can lead to foundation failure, not to mention growing mold everywhere.  I was telling myself, "Gee, I'd hate to be this killer's insurance agent", and "How did he ever get a policy in the first place, with a lake in his basement?"!
Water in and under your house can lead to all kinds of problems.  And to add more insult to injury, insurance policies likely won't cover damage done by water when it's been going on for some time.  Say you've got a pipe in your shower that's leaking behind the wall, and over time, rots out the subfloor in the bathroom. By this time, this situation is likely NOT covered by insurance, because it happened over time and was not addressed earlier. 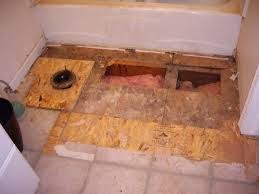 Same thing with a leak that causes mold to develop.  If it's been growing as a result of all that water, that means the original leak started a long time ago, and your insurance probably won't cover anything.
The insurance industry, as a whole, sees long-term water leaks and its resulting damage as a customer maintenance-related issue, where the homeowner should have known about it far earlier, when it could have been addressed easier.
In general, insurance covers things that are "sudden and accidental" like a pipe bursting, a tree falling on a house, or lightning striking the house and starting a fire. That's why we have to be vigilant to all things related to our home plumbing, because they are not always readily visible.  Look for warning signs -- spots on the ceilings, a wet crawlspace, the sound of dripping behind a wall, water collecting cabinets under a sink -- are a few examples.


Good luck in solving any potential water mysteries in your home!