Frankly my deer -- watch out!


In my opinion, I have one the most beautiful commutes from my office here in Franklin TN.  I take the back roads, and in the middle of the route, climb a hill on a fairly windy road, but am rewarded after reaching the crest of the hill by seeing the beautiful, expansive, green valley below.  Almost like a moment out of "The Sound of Music."  It's also great to see the usual four or five deer who graze, rest, and frolic on the sloping meadow that starts just on the other side of the guard rail, all along the twisting downward roadway.﻿ 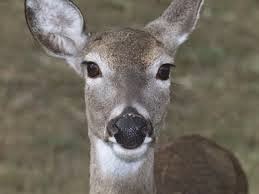 The only thing wrong with this picture is that deer routinely jump that guard rail and run across the road to the woods on the other side, and vice versa, not to mention simply standing there in the middle of the curvy two-lane road.  So I slow, way down, to grandpa-speed when I'm in that area, up and down the hill.
And so I've seen, unfortunately, carcasses of deer that didn't make it, hit by cars, all along this road.  Every year, about this time, deer mating season reaches fever pitch. In fact, most deer-related crashes occur between October and January, with the peak occurring in November.
According to the Tennessee Wildlife resources Agency, there are over 900,000 deer in the state, and the herd grows by about 1 percent to 2 percent each year, so there's plenty of deer-auto collision potential out there, of course, depending on where you are driving.  You're not out-of-the-woods, so to speak, on the Interstate, either.  The Tennessee Highway Patrol indicates that over 9 percent of deer-related crashes took place on the Interstates during a recent four-year period. "Watch out for deer" just needs to be another thing on your To-Do list while driving.
Is your "Comprehensive" coverage up to date?  Do you know what Comprehensive coverage is?  It's the part of your insurance that pays to repair or replace your vehicle if you hit an animal (in addition to covering for theft, vandalism, hail. etc.).  Make sure it's a part of your overall coverage if your vehicle is worth $1,500 or more.
Also, if you are ever forced to make a split-second decision of either hitting a deer or swerving off the road and into a tree or other object, please choose the deer.  You risk less injury that way, and may avoid an increase in your insurance rates (i.e. you don't get dinged on your premiums by colliding with a deer, but possibly would if you hit a tree).
If you haven't reviewed your current insurance in a while, especially to make sure you're properly insured for deer collisions, this might also be a great time to do so.  Just give me a call if I can be of assistance.
David Yates Insurance Agency
1881 General George Patton Dr., Suite 103
Franklin, TN 37067
Phone 615-778-1816  Fax 615-778-1817